Some time ago I purchased all the parts required to build a RepRap Prusa Mendel. This is basically a computer controlled hot glue gun, but it does not squirt out glue but hot plastic and it is not used to glue but to build up (almost) arbitrary shaped objects layer by layer. The fascinating and clever aspect of this machine (and the reason why it is called a RepRap) is that it is built with plastic parts that were produced on such a machine. That means it can replicate itself (with the exception of some metal parts, motors and electronics), and can print replacement parts and improvements for itself. The result is a cheap 3D printer (compared to commercial machines that can easily cost several ten thousand Euros) that has caused an impressive wave of unleashed creativity and surprising applications [1].

The prices for the plastic parts and all the other required parts have been getting constantly cheaper, and there are several specialised webshops were everything from the more exotic hardware to preassembled parts to complete DIY kits to fully assembled machines can be bought [2]. I would advise everyone who tries to build such a machine to buy as much as locally as possible. I ordered some parts from abroad (but still within Europe), and this order took almost four weeks to arrive and was relatively expensive because of international shipping and bank transfer fees (might not apply if paying by Credit Card or similar). The parts I ordered from Germany on the other hand arrived very fast.

Assembling it took roughly one weekend. The machine has some (very) rough edges from an engineering point of view, but does not require exotic tools (at least not if you buy things hot end preassembled, as I did). 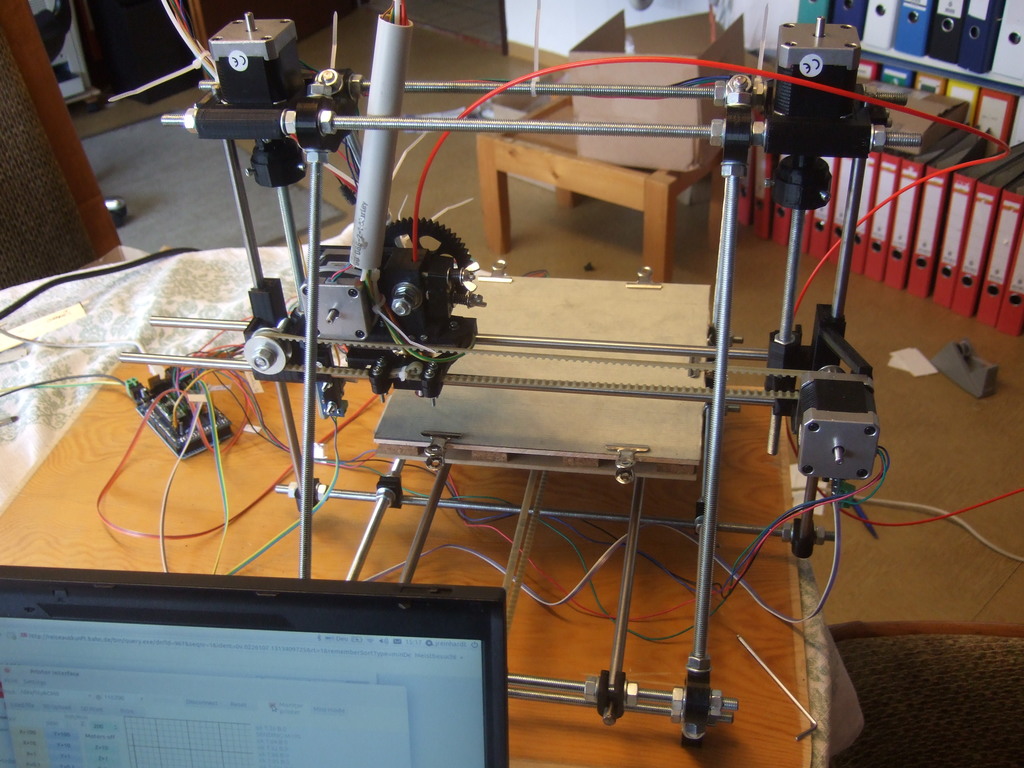 Unfortunately one of the stepper driver boards was dead (or maybe I killed it with my soldering skills), so we were not able to proclaim victory back then. The problem with the stepper driver manifested itself in one of the axes only moving in one direction. Other possible causes for such behaviour seem to be problems with the endswitches and the firmware, or bad soldering someway along the way of the DIR signal. After ruling out these possibilities I decided to order a replacement stepper driver.

Today I soldered the replacement part. Then I spent some time adjusting the motor currents. I had read that the current is to low when the axes stutter. What I had not read was that stuttering can also occur if the current is to high and the thermal shutdown of the driver chips kicks in. Together with me misreading the labels of the motor current potentiometer this lead to much too high motor currents, hot chips and a puzzled operator. After I worked this out, I greased the axes, calibrated the firmware, leveled the print bed, tightened the belts and moved the endstop switches.

I was then able to fire off the first print. I printed the Prusa mendel belt clamp, as it is the smallest part and is not particularly difficult to print. I used red PLA, the Printrun host software, and the Skeinforge profiles of GregFrost. When I hit "print" the machine homed successfully, the nozzle heated up as expected but after the third layer something clearly went wrong, as can be seen at the part in the back of the picture. The layers did not line up, were shifted with respect to each other. 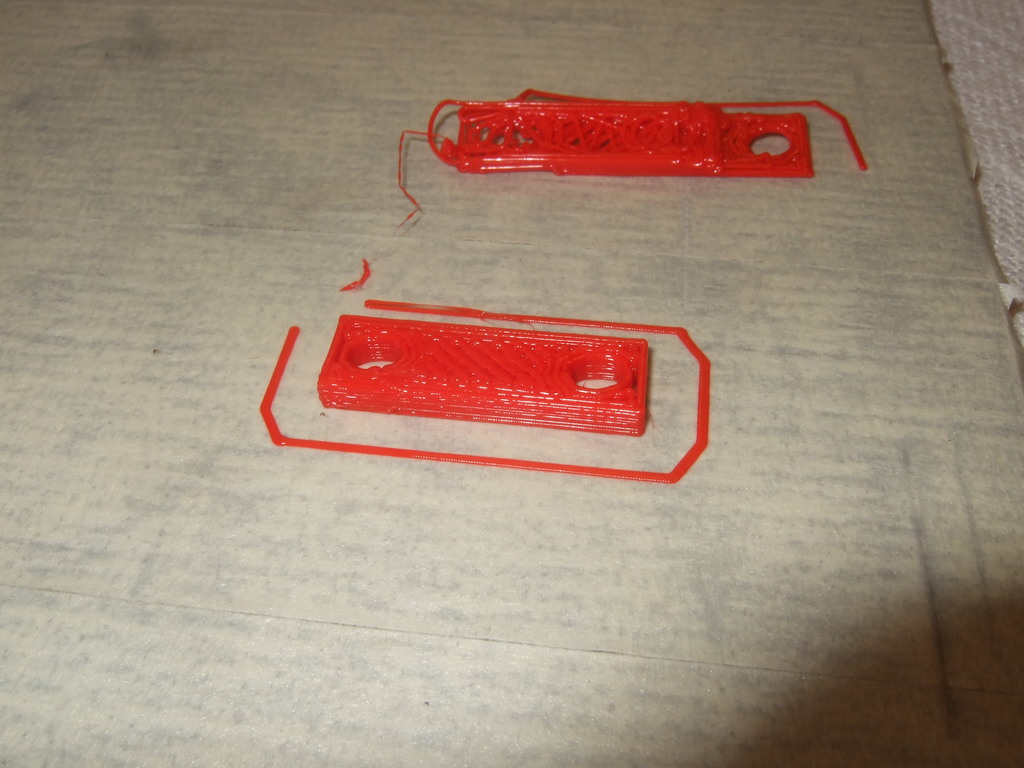 I remembered that I had somewhere read about this problem and after some search I found the site (http://www.keegan.org/reprapblog/). And indeed, my x-pulley slipped, as the grub screw was not tightened properly.

The second print (again the belt clamp, front part on the picture) is already very nice, but the calibration of the printer seems to be off, as the holes came out elliptic and the hole for the nut is squished.

I will report further progress, but it will take a while, as I will not be able to work on the machine in the next weeks.